Controlling pests and diseases in the green space is harmful, but chemical poisons cause environmental hazards such as water and soil pollution and threaten the health of citizens.

The sprinkling of poisons on the surface of sidewalks and streets and even grass and recreational areas of parks pollutes the living environment of citizens.

The soil, water and plants of the green space are highly polluted due to the multiple use of poisons, and directly or indirectly by sitting or playing in these spaces, as well as the dust of poison-contaminated soil, endanger the health of the citizens and cause important complications in They cause short-term side effects such as abdominal pain, dizziness, headache, nausea, eye and skin problems, and long-term side effects such as severe breathing problems, memory disorders, depression, neurological abnormalities, cancer, and sterility.

It is necessary to replace organic methods to maintain the health of citizens.

While chemical land management focuses on treating problems caused by conventional management practices and chemical use, the organic approach is a preventive system that addresses root causes.

In this context, unwanted organisms (pests, including insects and weeds) are the symptoms of a problem caused by poor soil health and management practices.

A new law in France bans the use of lawn and landscape pesticides in both public and private areas frequently used by the public. The law, which came into effect at the beginning of this month, applies throughout the country and extends the scope of a previous decree that restricted pesticide use on green spaces in public areas

The use of organic poisons of plant origin, such as palizin and azadirichtin, biological control by beneficial insects and microorganisms, including parasitoid bees and predators such as ladybugs and baltoris, as well as fungi and antagonistic bacteria, biological and sticky yellow cards, and informing citizens and the use Appropriate and accurate equipment for operational control of pests and diseases and integrated pest management are among these methods.

More than 80% of pesticide residues in humans, especially in children, have serious risks .
Also, almost 20% of pesticides may cause cancer .

The concept of pollution and its importance in space Green pollution is any change in the characteristics of the components of the environment in a way that directly or indirectly endangers the interests and life of living organisms.

The impact of pesticides in the environment

contamination of water and soil resources

One of the issues that our environment is suffering from is the contamination of water and soil resources by pesticides and plant diseases.

Although plant protection experts advise farmers and horticulturists to use other methods other than chemical control to control pests and plant diseases in order to prevent environmental contamination with chemical toxins, but still choosing this method is their first priority.

The reason for that is the relatively quick and decisive effects that poisons have on plant pests. Other methods of fighting are biological methods with all the advantages of the environment, the effect of which is long-term, and the environment should not be harmed by the extensive use of plant pesticides for the purpose of faster conclusions.

The history of the use of poisons , some arthropods have been known as enemies of humans in order to reduce agricultural products and carriers of diseases, and humans have always sought ways to deal with these enemies since the beginning of civilization.

And at the same time, it was customary to use plants such as pyrethrum, nicotine and rotenone.

The 1940s was the beginning of the “insecticide revolution”. Pesticides are an essential tool for every landscaper

Pesticides are an essential tool for every landscaper to have in his or her toolbelt. When handled responsibly, pesticides help the properties landscapers have been entrusted with to thrive.

It is important that those using these pest repellants have a thorough understanding of what they are and how to use them.

While the majority of organisms defined as pests are insects, they also include plants, fungi, and other invasive animals.

From the great plagues of locusts described in ancient texts to the Zika fever epidemic of 2015, humans have been waging war against pesky parasites.

Pests include living organisms which:

Pesticides are usually used in the form of pellets, granules, emulsions, and suspensions, and their entry into the environment takes place after consumption.

The introduction of pesticides into surface runoff is a complex process, and it is difficult to define and transform its various physiochemical parts into mathematical concepts.

Water sources can become water sources due to the improper use of these substances without considering environmental considerations and accidents caused in agriculture, industry and trade of pesticides compared to observing the correct principles of agriculture.

Transmission of pesticides through precipitation and atmospheric fallout, direct contamination of surface water due to the transmission of air currents (transportation along with agricultural runoff),

the flow of water from the soil layers and soil erosion,

the accidental entry and incorrect disposal of toxic and industrial wastes, direct application in water resources to control aquatic insects, the effect on the aquatic ecosystem,

the behavior of pesticides in aquatic environments are affected by many factors and on the other hand, the sensitivity of living organisms to pesticides is very different from each other.

According to EU regulations, the maximum concentration of 10 mg/liter for a specific active ingredient and a total of 50 microgram/liter for all pesticides in water must be observed.

The level of toxicity of different pesticides is different for different types of fish.

Pesticides in low concentrations are fatal for aquatic invertebrates and fish, such as endrin for rainbow trout with 0.007-0.006 mg/liter. And the lethal dose of DDT for this type of fish is 0.016-0.018 mg/liter. A look at the harmful effects of chemical pesticides on the environment.

Chemical pesticides (including pesticides, fungicides and herbicides) are substances that are used to prevent, destroy or repel pests (including harmful insects and molluscs), plant diseases and Weeds are consumed.

But there are other groups that are natural and have less toxicity compared to the previous group. This group consists of substances that have plant origin.

Likewise, another group of poisons called microbial insecticides, which are sold commercially to fight the larvae and babies of pests, do not carry the dangers of penetrating poisons. Using such materials is the best way to prevent environmental pollution.

Pesticides enter the atmosphere either through evaporation or directly through the air.

Surface waters, industrial and urban effluents and the direct application of pesticides to control aquatic pests are among the ways that toxins enter water resources.

The soil is also contaminated by plants treated with poisons, rain, burying empty containers of poisons, and their direct use on the soil.

For optimal and appropriate use of pesticides, one should be aware of the purpose and method of spraying.

The purpose of the nuisance is that we want to eliminate it.

Conscious action can be very useful and effective in preventing environmental pollution.

For this purpose, we must know for what purpose we want to use the poison. In fact, determining whether our target is an insect (as a pest) or microbes and fungi (pathogens) is the first step towards starting a decisive and at the same time low-risk fight.

After determining the problem of the plant, it is possible to prepare the appropriate type of poison and use it with the minimum amount possible.

Landscapers are destined to encounter pests. Be prepared to combat the pests that plague your clients’ properties by educating yourself on the importance of proper pesticide application.

Each property is different and requires pest control tailored to the environment’s specific needs.

Another point that needs to be taken into consideration when using pesticides is that spraying is done in such a way that the pesticide reaches exactly where it should and avoids spraying it around the spraying area.

To achieve this goal, the setting of spraying equipment is of visible importance.

Wind blowing of poison particles is one of the factors of its dispersion in the environment, which leads to water and soil pollution, as well as the air we breathe.

So, one of the principles of successful spraying and decision is to spray in completely calm weather. This issue is especially important in the urban green space.

Because sprinkling poisons on the surface of sidewalks and streets threatens the health of citizens.

Also, spraying is not recommended when there is a chance of rain, because the poisons washed away by the rain can contaminate all water sources.

Of course, it is better to buy pesticides as much as needed, which, in addition to being economical, does not cause environmental risks due to storage.

But since this issue happens less often and there will often be some extra poison, safety principles should be observed in storage.

Improper storage of poisons in warehouses leads to environmental pollution for a long time.

One of the storage conditions is keeping poisons at the right temperature. Excessive heat causes explosion and fire.

According to a senior FAO expert, pesticides that are improperly stored or exposed to sale easily penetrate into food or are released into the environment.

Another aspect of the problem is soil contamination with pesticides. Leaving empty poison containers in the environment without proper disposal is one of the factors of soil pollution.

When throwing away empty containers, we must wash them several times with water and return the washing effluent to the sprayer, and then carefully wrap the washed empty container in waste paper and throw it in the trash.

In the end, it should be said that perhaps by observing the above points, the side effects of pesticides can be reduced to some extent, but the important point is that we should take steps towards the elimination of chemical poisons.

For this purpose, it is good to implement other strategies to combat plant pests in the form of integrated pest management. 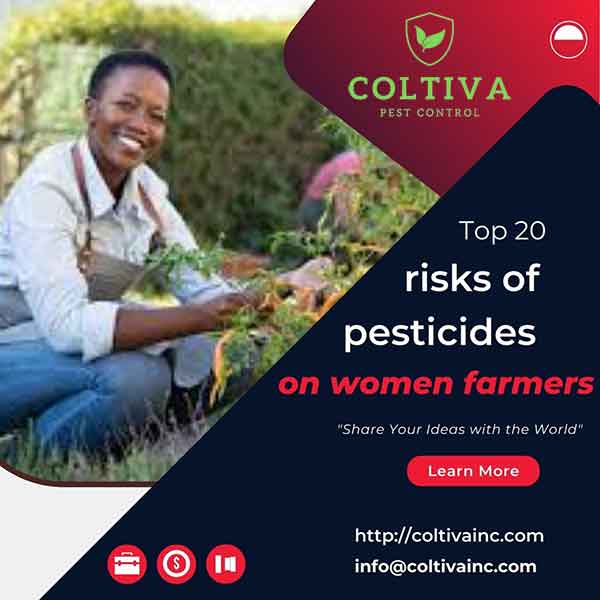